In the early 1940s he had his own show on Beaumont,Texas radio KDFM where he eventually became the program manager… 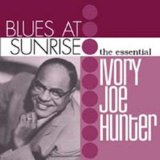 Ivory Joe Hunter transgressed from Blues to Boogie Woogie and Country—He made a name for himself in all those genre; being honored at not only The Monterrey Jazz Festival but also at the Grand Old Opry!!!

Hunter was best known for his R'nB Hits:

"Since I Met You Baby"

"I Almost Lost My Mind"