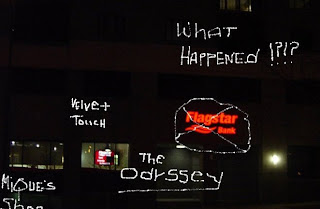 
In June 2011 my good friend Yvette Beausoleil sent me some old ODYSSEY photos which I forwarded to Kim "Retro Kimmer" Maki.:

THE RABBITS
Martin Simmons and Company 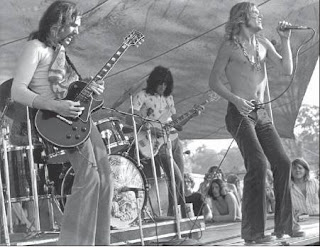 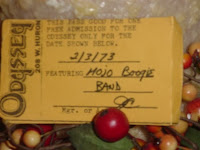 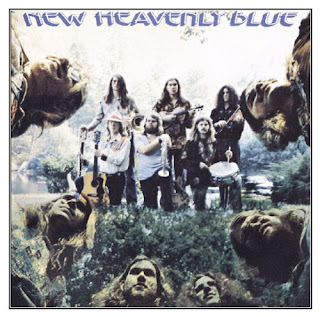 rehearsals three times a week, Concert Band, Small Brass Ensembles and led various student rock-n-roll groups.  During his days as a bass trombone performance major at The University of Michigan, Chris led, toured and recorded with his innovative "rock" bands, New Heavenly Blue (with releases on R.C.A. and Atlantic Records) and in 1975 Sky King on Columbia.  (Encyclopedia of Jazz Musicians) 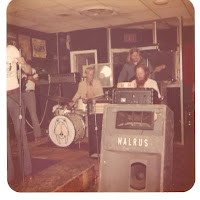 LIGHTNIN' I
Mark Gougeon - bass, lead vocals, Jeff Jones - lead guitar,
Tim McCoy - keyboards, vocals, Dave Morgan - drums
Lightnin', as well as playing at THE ODYSSEY, toured extensively in the south and opened for Wet Willie, Guess Who, Black Oak Arkansas and so many others. BTW: Their 4 song EP sold for $60 recently!       (Thanks for this info goes to Al Jaquez)


This was THE Detroit jam band of the 1970s.  Heavily influenced by the California scene, they were fairly unique in the Motor City. Their home was the GAR WOOD MANSION (a whole story in itself!). With their nutty "road manager Stanley," they brought a lot of great music and musicians to play at THE ODYSSEY... 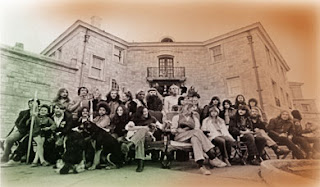 Stonefront at home at the GAR WOOD MANSION

SATIVA
Nancy Smith on vox and Robby Stawinski on drums 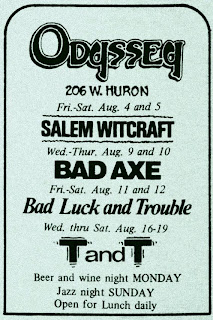 (Note the mistake on the address--Made no difference, close enough!!! Actuall 206 was the address of the old Fifth Dimension)

NORMAN AND THE FRUT 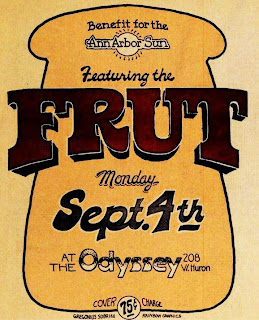 THE (DANGEROUS) UP
JUST LIKE AN ABORIGINIE, The (Dangerous) UP 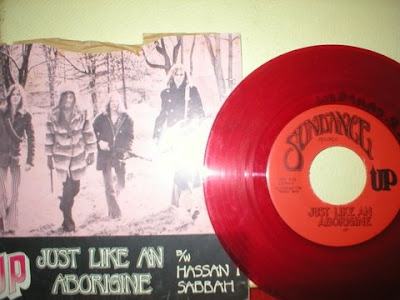 Gary Rasmussen on bass, Bob Rasmussen on lead guitar, Scott Bailey on drums and Frank Bach on vox--Hiawatha Bailey on equipment!
NOTE: Although originally managed by David Sinclair (R.I.P.), by the time these shows were happening Sister Anne LaVasseur, one time MC for the UP, was actually managing the band--The FIRST female manager in R'n;R history (or so I've been told). Anne still ROCKS as a gemologist in Hawaii!!!

…we (The UP) had been playing gigs with this band Brat from Mount Clemens. Really, we called up Leon [Mills], he was the singer, and we told him, “This is what we want to do. We want to have a band. We’ve got me and my brother, and what we need is you and your drummer and your guitar player. Let’s do it.” We moved ‘em up to Ann Arbor and put ‘em in the carriage house between the two houses and started the band from there. It turned right from Up to Uprising, and that band was managed by John Sinclair and Peter Andrews. John was out of jail by then and he was managing Mitch Ryder and the Rockets--Gary Rasmussen

Uprising 1973
*"Little" Leon Mills (V)
*Bob Rasmussen (G)
*Don Benson (G)
*Nate Peterson (V, B)
*Wilson Owens (D)
...a lot of stuff pissed off Leon (Mills) and what they decided they'd do is get Nate Peterson, who's a good singer and bass player. So basically, they fired me and got Nate Peterson--Gary Rasmussen

NOTE: Leon passed away in 2013. R.I.P. Little Leon. You never really got your props, but those who know REALLY know...

MARCUS
Marcus on vocals (just Marcus,  one name), Jeff? on guitar and K.C. Black on drums (K.C. also was the drummer for Chairman of the Board)
(Thanks to Wayne Dabney for jogging my memory on this one!)
DETROIT (WITH RUSTY DAY) 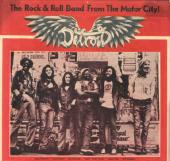 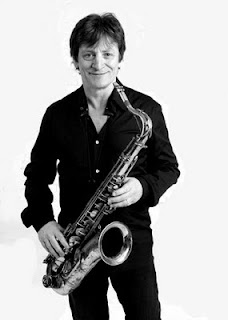 
THE THE ROCKETS came to THE ODYSSEY when they were associated with Peter Andrews and The Rainbow People (Rainbow Productions). The ODYSSEY was the hottest venue and THE ROCKETS--with Bee, McCarty, Marc Marcano and Fraga the only four in the line-up--were the hottest act in town at the time They split their time between THE ODYSSEY, Red Carpet and the Rock & Roll Farm, but they were Ann Arbor cats for awhile. Fraga (R.I.P.) spent a lot of time at our (ODYSSEY staff) houses on Miner Street and Brooks Street on the westside of A2. Later on, Donnie Backus of THE MOJO BOOGIE BAND (pretty much the house band at the ODYSSEY for awhile) replaced Marc while they were still playing the ODYSSEY on a regular basis. One of the COOLEST shows the ROCKETS did at THE ODYSSEY was the night that Jerry LeCroix sat in with the band--But EVERY night (usually weekly) that THE ROCKETS played this club was INCREDIBLE!!!  Unfortunately Dave Gilbert  (R.I.P.) never played the ODYSSEY with the ROCKETS, he came on after the ODYSSEY's demise...

Johnny Ace on bass and vox, John (Nuzzo) Leslie harp & vox, Howard Levine, guitar and Frannie Kristina on drums--Tino Gross (Howling Diablos) was also off and on with the band) 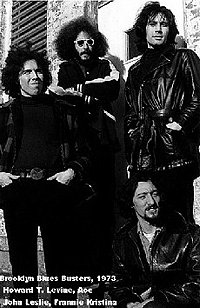 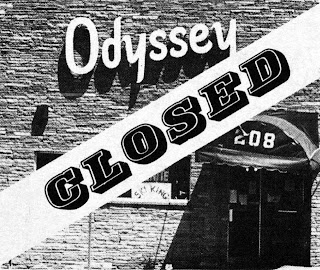 MEMORIES (From those who were there):


One of my first Odyssey memories - Cheryl Kaiser & me standing at the bar in front of a freshly made Tequila Sunrise; Cheryl - "Grab a straw!" and we'd race to the bottom
...Joanne Shumeyko Johnson 6-15-11

That's where I met Mike Gould one night in 1973 leading to the formation of the Martian Entropy Band
.--Hugh Hitchcock 6-19-11 (Check 'em out by following the link below, JC/ODYSSEY)
http://martianentropyband.com/YouTubeMovie.aspx?movieurl=http://youtube.com/v/WQ_pq7WlZyc&title=Pandemonium%20Ballet%20Pt.%201

We called it 208 Odyssey because of the neon # in the window. I remember seeing the Rockets there before they hired Dave Gilbert. Johnny B was doing the lead singing.
-- T. Kinks Heiss 1-12-11


I remember dancing my ass off during and in between sets.Then everynight i would order 3 double vodka collins sour. No wonder i'm a recovering alcoholic! Alot of good and crazy memeories there!
--Robin Scott 1-18-11

Actually, during that period I was so busy & broke trying to cobble together my own bands, I didn't make it to the Odyssey as much as I wanted
--Jeff Alder 6-18-11

It's so complicated to put together in writing, how one thing led to another, landing me on Bowie's Ziggy Stardust Tour and back to the Odyssey - and all because of the Odyssey...
--Billy Goodson 6-18-11 (NOTE: Check out more about Billy Goodson)
--Jon Campbell/ODYSSEY

Hi Jon, Thank you so much for the picture from 1972. That was the year I graduated from high school and moved to A2. I turned 18 at The Odyssey and Angie Bowie was there. What a trip. Those were definitely the days!!!!! Good to see you are healthy and happy. Take care and thanks again!! Cordi.
--Cordi Cole Frei 6-19-11

Hi Jon--I was the drummer in the last incarnation of the Chip Stevens Group and we played a few times at the Odyssey back in the day... I write this as I'm getting ready for a gig this evening @ The Grove in Anaheim with one of the two bands I'm currently in - still at it after all these years
.--Clark Pardee 6-25-11


I was pretty young. Between the Fourth Ave people in the day to the fabulous bookings at night, I took it all for granted. Now they are all some of my best memories.
--Patty O'Rorke 8-31-11
(Patty was on the staff at THE ODYSSEY pretty much at the beginning. She remembers those "Fourth Avenue People"--Cool...)
Posted by Tropical Jon at 7:33 AM

I remember dancing my ass off during and in between sets.Then everynight i would order 3 double vodka collins sour. No wonder i'm a recovering alcoholic! Alot of good and crazy memeories there!

I worked as a roadie for Brat, Carnal Kitchen, Marcus, and later Radio King. Now I take lots of photos, write a little and try to be a good Great Granddaddy. Back then the Ann Arbor music scene was the best in the state. It's better than it's been in recent years but still has a long way to go to get back to those Huron Street days. Where are the Willard Hill Boys when ya need um?

Thanks for creating this blog. Those were the best days for rock bands playing in the bar circuit!!

I was hired to cook when i was 20. I only had to cook hamburgers and stacked ham and cheese sandwiches, but i had never cooked anything in my life. The grill lighting was one 15watt red light bulb, so I could never tell if the burgers were done. Served lots of raw meat!
First drink order was for a Micky's Lobe. Couldn't find it in the book. Turned out they wanted a Michelob! What did I know? Learned to drink there (among other things), Thanks Jon! The bands were incredible!

Name's Jeff Alder - not Adler. Happens all the time. I've even been credited in magazines and album covers as Adler. The Warren Zevon Stand in the Fire live album has me as my real name of Alder, but by the time it went to CD, they changed it to Adler.

I used to go to the Oddysey twice a week when Bob Rosenthal's blues band was the house band--and played 2 times a week there. I worked at the Salvation Record store and Bob was our manager, so we all went there as a group to give him moral support. Iggy's road and equipment managers (Bill Cheatham (aka "Strawberry)and Eric Haddix used to join us almost every time. I was back in A 2 a few years ago and couldn't recognize where the Oddysey was--good to know it was because the building is actually gone. I saw so many good local bands play there.

Pat Greeley...ah that smell, beer,puke and cig smoke...I think I got laid every night I worked there!