MY INTRODUCTION TO UP FRONT AND PERSONAL ROCK 'N ROLL... 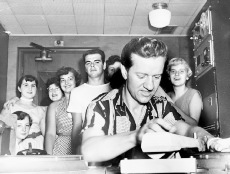 CHEDWICK
THE DADDIO OF THE RADDIO
In my previous blog (Check it out!)
http://tropicaljon.blogspot.com/2011/03/pittsburghs-daddio-of-raddio-and-his.html
I gave a bit of Porky's background, posted several tunes, and mentioned  a few of the other Pittsburgh DJs . Porky was and always will be THE BOSSMAN of Doo-Wop, R&B, R&R and Soul Music, but his "Disciples" also spread his music, which became OUR music in teen dance clubs and other venues throught The Burgh and beyond,
I was eleven years old when I sneaked into my first teen dance at the Tarentum, PA YMCA. Don't know who the DJ was, but  it may as well have been Pork the Tork himself when I heard that Porkysound blasting at concert volume, saw the "party lights" and checked out tthe girls (man, the girls!)--in their teased to the max and glittered hair-- and the guys--in their waterfall hair and pegged pants--slow dancin' and rockin'. Right off the jump I knew that these places were the kind of venues that would be a major part of my life forever--I was experiencing "THE THING" up front and personal, The music and the scene was THE THING!!!
That was in 1960 and all the tunes weren't all that old and I knew many of them already because of Porky, Bob Livorio and my older brother and cousins, and to a small degree (at the time) my own record collection. The first tune I heard (and later became the first slow tune I ever danced to) was a new one,  Rosie Hamlin's ANGEL BABY,

http://www.youtube.com/watch?v=9xm3qnh1sck
and the lyrics never left me to this day! The whole scene became my Angel Baby (check out the lyrics and you'll know what I mean)--If you couldn't tell already, I love this music and the whole scene that it is!

Jimmy Charles' MILLION TO ONE
http://www.youtube.com/watch?v=BtvF6SnncXE
was the next tune to come out of those giant speakers and I was flipped! It was another new tune with the sound that Porky had made into OUR sound and was even better than a lot of the old stuff--OUR music had taken over the world and I KNEW that I was part of THE THING (and thereby very cool)--and only eleven years old!!!

http://www.youtube.com/watch?v=h6OztcWULRI And, what a way to end a set of new tunes--Kathy Young & The Innocents' 1000 STARS IN THE SKY.. So all the great new music wasn't by Black (Negro, at the tine) performers. but it all had that sound to which Porky had hipped us. We were all getting it together and that was because of the music--OUR music!!!

There ya go; my very first set, at my very first dance was a slow set of new music--Go figure, all three of the tunes in that set were released that year, and that year was 1960 and the place was Tarentum, PA, just up the valley from The Burgh...

The intro to Hank Ballard's LET'S GO, LET'S GO, LET'S GO triggered a very cool transition and the dancers rolled into the fast set --everyone of them cool as could be falling into the groove and I felt the energy teaching me, right on the spot, how to roll with the music along with the rest of the rockers. Of course I was kind of hidden behind the door--I'd had to sneak into the joint! 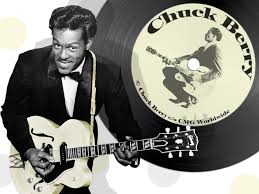 Right on the tail of the Hank Ballard tune came Chuck Berry's SCHOOL DAYS blasting out of the speakers and the place went wild!!! And I realized that I was in trouble 'cause it was already after 9:00 pm and I was WAY late in getting home (eleven year old sixth grader, remember!?!). I made it home before Mom & Dad and my brother wasn't there either, I'd made it! But ya know what--no punishment would have been too severe for me to endure (had there been any) 'cause it was official now--I was one of the cool kids!!!
Posted by Tropical Jon at 10:16 PM

Thanks for sharing this blog. I can remember some of these singers. I had a relative that was 7 years older than me, so i would listen to all his records.

Thanks Geri. I LOVE Detroit Rock 'n Roll, but this is what I grew up with and what brought me to a place where I could REALLY understand even more about the Detroit/Ann Arbor scene...