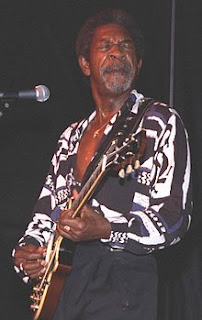 Luther in 1996 (Photo Credit: Wikipedia)
Luther got his big break  in 1957 when Muddy Waters invited him to the stage. He worked the club circuit throughout the late 1950s and early 1960s and recorded his first single in 1965. Signed to the Delmark Records label in 1967, he released his debut album Love Me Mama the following year. 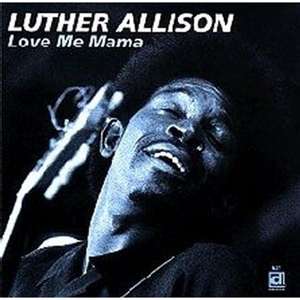 PLAY LOVE ME MAMA
After a  well-received set at the 1969 Ann Arbor Blues Festival, Luther was  asked to perform there each of the next three years.  Luther embraced the Ann Arbor/Detroit scene and could be seen hanging out and be heard playing in the area’s real “in the trenches” venues (THE ODYSSEY, THE RED CARPET, etc.) 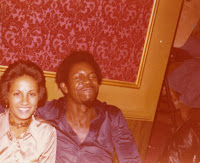 My all time favorite rock bar. the Red Carpet was on the lower eastside. My friends and I would go there thursday, friday, and saturday. This picture was taken in1975 It was very small and everyone knew each other. This blues singer name was "LUTHER ALLISON". He performed there and in Ann Arbor often--Geri Gillespie

Luther also toured nationwide and, in 1972, was signed to MOTOWN RECORDS the first and one of the few blues artists to do so.
By the mid 1970s he toured Europe and eventually  moved to France in 1977. He would not return to the United States for another fifteen years. 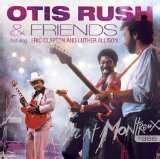 Over the years, Allison delivered one show-stopping performance after another. His boundless energy and fierce guitar attack combined to make him a blues superstar who reached rock fans like no bluesmen since Freddie King and Albert Collins.  Allison was known for his concert performances, lengthy guitar solos and crowd walking with his Gibson Les Paul. 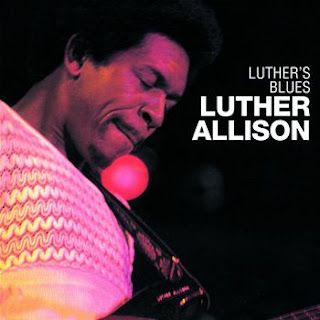 LUTHER'S CAT BLUES
When the news broke that Allison had been diagnosed with inoperable lung cancer in July of 1997, the blues world was shocked. When he died just four weeks later, they were devastated. Without a doubt, Luther Allison's death robbed music fans of one of the most exciting and popular blues performers ever.
Posted by Tropical Jon at 10:23 PM

Thanks for adding my picture to this article. He lives on in my heart forever.