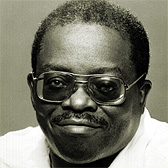 That led to a recording contract with RCA and then with Jay-Dee. His first release was his own composition "Daddy Rolling Stone"


(which was an even bigger pop success for Peggy Lee).

Then, "All Shook Up" (first recorded by David Hill on Aladdin) began a highly profitable association with Elvis Presley, who, erroneously was credited as co-writer of the Otis Blackwell composition.

Blackwell was one of the leading African American figures of early rock 'n' roll, although he was not well known by the public. His own records never cracked the Top 40, yet he wrote million-selling songs for Elvis Presley, Jerry Lee Lewis, Dee Clark and others.

Songs he composed, with the performer who made them famous, include (but are not limited to):

In 1991, Blackwell was left paralyzed by a stroke. Three years later, Shanachie released Brace Yourself! A Tribute to Otis Blackwell. The album features 15 Blackwell-penned tracks recorded by the likes of Kris Kristofferson ("All Shook Up"), Blondie's Debbie Harry ("Don't Be Cruel"), The Smithereens ("Let's Talk About Us"), Graham Parker ("Paralyzed"), and Ronnie Spector ("Brace Yourself")...


(With a heavy dappling of Crispin Cioe, as well as, The Uptown Horns…)


Otis Blackwell was one of the greatest R&B songwriters of all time. His songwriting style is as uniquely identifiable as that of Leiber and Stoller, Chuck Berry, or Willie Dixon and helped redefine popular music in America in the 1950s. This is true even though he often collaborated with such partners as Winfield Scott, Eddie Cooley, and Jack Hammer. Blackwell was one of the most important innovators who helped invent the musical vocabulary of rock & roll at its very beginning. Blackwell's works have been recorded into immortality by a host of other major figures in the record field, including Jerry Lee Lewis, Ray Charles, Otis Redding, James Brown, The Who, Johnny Thunders, Billy Joel, James Taylor, Dolly Parton, Conway Twitty, The Judds, Carl Perkins and Peggy Lee, among numerous others. At other times in his career, Blackwell has also been successful as a record producer, having helped turn out hits with artists as diverse as Connie Francis, Mahalia Jackson and Sal Mineo.

Otis Blackwell died in 2002 of a heart attack and was interred in Woodlawn Memorial Park Cemetery in Nashville, Tennessee…


THE USE OF ANY COPYRIGHTED MATERIAL IS USED UNDER THE GUIDELINES OF "FAIR USE" IN TITLE 17 & 107 OF THE UNITED STATES CODE. SUCH MATERIAL REMAINS THE COPYRIGHT OF THE ORIGINAL HOLDER AND IS USED HERE FOR THE PURPOSES OF EDUCATION, COMPARISON, AND CRITICISM ONLY. NO INFRINGEMENT OF COPYRIGHT IS INTENDED
Posted by Tropical Jon at 6:28 PM