Photo courtesy of the Cleveland Plain Dealer.
Photographer: Larry Hamel-Lambert, Plain Dealer staff
"The thing about rock is, it gets you up on your feet and dancing and you forget everything else," she said. "The beat gets you going." --Jane Scott


Jane Scott graduated from the University of Michigan in 1941 where she earned a Bachelor of Arts degree, majoring in English, Speech and Drama: Scott’s first experience with journalism was as a staff member of the school newspaper, the Michigan Daily.


In 1958, she inherited the “Boy & Girl” column; at the time, it was a full page in the newspaper each Saturday. Aimed at seven- and eight-year-olds, it was the beginning of the present day rock coverage in The Plain Dealer. The column name became “Young Ohio” and eventually was called “Teen Time.” Scott described her reporting beat as “covering everything from pimples to pensions.” Scott covered the Beatles' first Cleveland performance at Public Hall on September 15, 1964 and traveled to England in 1966 to cover their tour. She also interviewed the Beatles before their August 14, 1966 show at Cleveland Municipal Stadium. “When the Beatles appeared on Ed Sullivan’s show, I knew what the kids really wanted to read. Once I found rock, I was never interested in anything else.” At the time, The Plain Dealer was the only major American newspaper to have a full time music critic on staff, thus Scott is considered to be the world’s first rock critic. In the 1960s, in preparation for her eventual work as The Plain Dealer's Rock Editor, she spent every Saturday night for six straight years at the WEWS television station for the tapings of the "Upbeat" show. 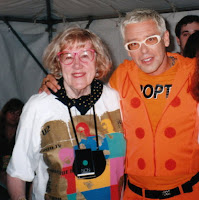 Jane Scott, rock reporter for The Plain Dealer, poses with Adam Clayton, bass player for U2, during U2's Popmart tour at OSU Stadium in Columbus May 24, 1997.
Photo by Mary Cipriani.
Over the years, she interviewed many of the biggest names in pop music, including Paul McCartney (“such a nice boy,” she said afterward); Mick Jagger (“sweet and funny”); and Jim Morrison and Jimi Hendrix (“I loved them both”) and The Who...

Jane Scott interviewing The Who...

In four happy decades as a rock writer for The Cleveland Plain Dealer, Ms. Scott, who died on Monday at 92, braved mud and mosh pits, foul weather and fouler language, “a drop of bleached blond and pink polyester in a roiling sea of blue denim and black leather,” as The Philadelphia Inquirer once described her


She appreciated all forms of rock and made friends of many musicians. Lou Reed said she was one of the only people to treat him with respect in his early years as a performer; Lyle Lovette called her a "true friend"; she herself often told the story of accompanying Jimi Hendrix to buy a blue Corvette.

In 1987, The Plain Dealer attempted to replace Scott but was met with strong public outcry and backlash, including feature stories in People Magazine, MTV News and The Wall Street Journal, resulting in the newspaper’s editors backing down from their plans. Scott was inducted in 1991 into the Cleveland Press Club Hall Of Fame,
Scott retired in April 2002, after 50 years at The Plain Dealer. Scott estimated that she had attended over 10,000 concerts and music events during her career. Jane’s signature interview question was: ‘What was the name of your high school?’

What others have to say:


·         Growing up in Cleveland, I devoured every word she wrote: about Jackson Browne, Gil Scott Heron, Springsteen, the Ramones, the Stray Cats and Heart. She made me feel like I knew them, because she did. Not only did she, she got the very best out of exhausted, often cranky, certainly entitled stars. Because she could -- and did with unwavering dignity -- I believed I could too. -- Los Angeles Times: Holly Gleason
·         She was always one to take the high road. I heard a story about Elvis Costello being less than kind to her backstage at an Agora show - Jane's response on the following day didn't involve slamming Costello in print, but instead, she gave additional column space to the young opener, Eddie Money. -- Addicted to Vinyl: Matt Wardlaw
·         She was one of a kind in an era where an emerging music scene in a vibrant music city met the perfect woman at the perfect time. -- Honesty is such a shallow grave: Eric Broz
·         I remember sitting next to her at a Kinks concert. Jane opened up that tote bag and offered a stack of photocopied pages from some encyclopedia of rock on the Kinks. “I have extras,” she said. -- Warren Tribune Chronicle: Andy Gray
CLEVELAND - Jane Scott wrote decades worth of rock 'n' roll news for Cleveland and beyond. She spent her career writing for the Cleveland Plain Dealer, and she died early Monday morning at the age of 92.
Scott began working at The Plain Dealer at the age of 33. She originally covered the Cleveland social scene and worked as a general assignment reporter.

One of Scott's first concert assignments was covering the Beatles in 1964. All in all, Jane is said to have attended over 10,000 concerts during her 50 years as a journalist.


The Upbeat Show, which aired on WEWS in the 1960's and early 70's, was another one of her regular stops. Scott was in attendance for most all of the Saturday night tapings to interview up-and-coming artists like Simon and Garfunkel and Otis Redding.
Scott interviewed the biggest names in the business like Brian Wilson, McCartney, Springsteen, and Dylan. She also spent a lot of time with lesser known local musicians.
Scott was an early supporter of the Rock and Roll Hall of Fame. She campaigned hard to make sure that it was built in

Cleveland. She even appeared on ABC's Good Morning America the day the Rock Hall had it's grand opening in 1995.
Funeral services will be held in Ann Arbor, Michigan. A memorial service will be held in Cleveland at a later date.