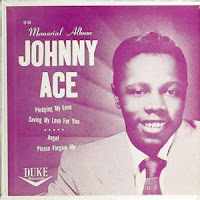 Johnny Ace (June 9, 1929 – December 25, 1954), born John Marshall Alexander, Jr. in Memphis, Tennessee. He scored a string of hit singles in the mid-1950s before dying of an accidental self-inflicted gunshot wound.  After serving in the navy during the Korean War (Going AWOL more often than not, John Marshall Alexander had soon been given his walking papers) 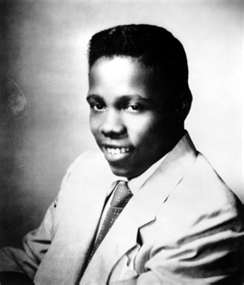 Out from under the thumb of the U.S. Navy, he bounced around, did a short prison term in Mississippi, and found himself back in Memphis in 1949 (where radio WDIA had just gone to on-air talent which was 100% African-American). Circulating through the city's extraordinarily fertile music scene which in the years after World War II featured such artists as B. B. King, Bobby "Blue" Bland, and Junior Parker, Ace held his own.

Johnny Ace's first professional recording date as a leader was "Midnight Hours Journey" in 1951 for the L.A.-based Modern Records (the same label recording B.B. King at the time). The record wasn't released for a few years--after Johnny Ace had already had a string of hits on the Duke label (out of Memphis). 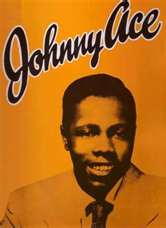 During this point in his life, however, Ace's personal life was in disarray. He had married ninth-grader Lois Jean Palmer and fathered a son by her; mother and child were installed in Ace's parents' house, but Ace himself was not permitted to stay there.

Despite these problems, his musical career was ready to take off. His breakthrough came in 1952, when the program director of WDIA launched his own label, Duke, and planned to record and release a single featuring Bobby "Blue" Bland on vocals. Bland botched the performance, and Ace was called on to replace him. Quickly cobbling together a melody of his own, Ace recorded the romantic ballad "My Song" and it became a regional hit. It was at that point that John Alexander became "Johnny Ace with the New Blues Sound." 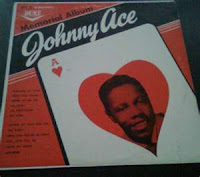 Becoming "Johnny Ace", he signed to Duke Records (originally a Memphis label associated with WDIA) in 1952.  "My Song"   his first recording, topped the R&B charts for nine weeks in September. ("My Song" was covered in 1968 by Aretha Franklin, on the flipside of "See Saw".) 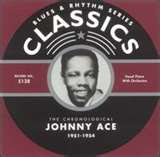 Ace began heavy touring, often with Willa Mae "Big Mama" Thornton. In the next two years, he had eight hits in a row, including "Cross My Heart," "Please Forgive Me," "The Clock," "Yes, Baby," "Saving My Heart for You," and "Never Let Me Go."  In December, 1954 he was named the Most Programmed Artist Of 1954 after a national DJ poll organized by U.S. trade weekly Cash Box. 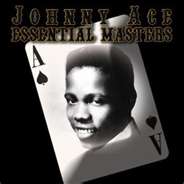 Ace's recordings sold very well for those times. Early in 1955, Duke Records announced that the three 1954 Johnny Ace recordings, along with Thornton's "Hound Dog", had sold more than 1,750,000 records
CHECK OUT "YES BABY" BY JOHNNY ACE AND BIG MAMA THORNTON:


After touring for a year, Ace had been performing at the City Auditorium in Houston, Texas on Christmas 1954. During a break between sets, he was playing with a .22 cal revolver. Members of his band said he did this often, sometimes shooting at roadside signs from their car...


It was widely reported that Ace killed himself playing Russian roulette. Big Mama Thornton's bass player Curtis Tillman, however, who witnessed the event, said, "I will tell you exactly what happened! Johnny Ace had been drinking and he had this little pistol he was waving around the table and someone said ‘Be careful with that thing…’ and he said ‘It’s okay! Gun’s not loaded…see?’ and pointed it at himself with a smile on his face and ‘Bang!’ – sad, sad thing. Big Mama ran outta that dressing room yelling ‘Johnny Ace just killed himself!"

Big MamaThornton said in a written statement (included in the book The Late Great Johnny Ace) that Ace had been playing with the gun, but not playing Russian roulette. According to Thornton, Ace pointed the gun at his girlfriend and another woman who were sitting nearby, but did not fire. He then pointed the gun toward himself. The gun went off, shooting him in the side of the head.

Ace's funeral was on January 2, 1955, at Memphis' Clayborn Temple AME church. It was attended by an estimated 5000 people…

NOTE: John Marshall Alexander, Jr. A/K/A JOHNNY ACE, should not be confused with my good friend, Johnny Ace, the GREAT NYC-Born bass player who, in his own right, is alive and well and sounding great with his band LemonAce.