GANGSTER OF LOVE, A THEME IN THE EVOLUTION OF ROCK 'N ROLL 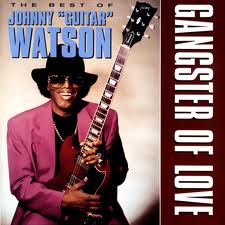 Johnny Guitar Watson's ferocious "Space Guitar" of 1954 pioneered guitar feedback and reverb. Watson would later influence a subsequent generation of guitarists. His song "Gangster of Love" was first released on Keen Records in 1957. It did not appear in the charts at the time, but later became a hit in 1978 and identified as Watson's "most famous song".

Jimi Hendrix did a version of the tune...

Steve Miller made reference to it in '69


Johnny reminded us where the tune came from in 1977!!!
Then Steve Miller finally copped to where "his"  tune really  came from in this 1983 recording...Well, kinda .


YEP, ALL ROCK 'N ROLLERS ARE  GANGSTERS OF LOVE!!!