Lloyd Price's version of "Stagger Lee" tops the R&B chart for the first of four weeks on Valentine's Day 1958: The History of Stagger Lee...

The story of Stagger Lee, or Stack-o-Lee, has been around for about a hundred years now.

VOL 5—NO.213. ST. LOUIS. SATURDAY MORNING. DECEMBER 28,1895—FIVE CENTS
William Lyons, 25, a levee hand, was shot in the abdomen yesterday evening at 10 o'clock in the saloon of Bill Curtis, at Eleventh and Morgan Streets, by Lee Sheldon, a carriage driver.
Lyons and Sheldon were friends and were talking together. Both parties, it seems, had been drinking and were feeling in exuberant spirits. The discussion drifted to politics, and an argument was started, the conclusion of which was that Lyons snatched Sheldon's hat from his head. The latter indignantly demanded its return. Lyons refused, and Sheldon withdrew his revolver and shot Lyons in the abdomen. When his victim fell to the floor Sheldon took his hat from the hand of the wounded man and coolly walked away.
He was subsequently arrested and locked up at the Chestnut Street Station. Lyons was taken to the Dispensary, where his wounds were pronounced serious. Lee Sheldon is also known as 'Stag' Lee.
NOTE: White lawyer Nathaniel Dreyden defends Shelton. Dryden was the first lawyer in the state of Missouri to gain conviction of a white man for the murder of a black man. 300 angry black people hiss and curse Shelton and Dryden as they enter the courthouse.
THE COMPLETE HISTORY OF“STAGGER LEE”
The first published version of the song was by folklorist John Lomax in 1910. The song was well known in African American communities along the lower Mississippi River by the 1910s. No recordings available… 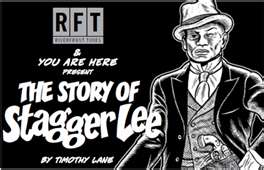 "Stagger Lee", also known as "Stagolee", "Stackerlee",
"Stack O'Lee", "Stack-a-Lee" and several other variants, is a popular folk song based on the murder of William "Billy" Lyons by Stagger Lee Shelton. Herb Wiedoeft and his band recorded the song in 1924..


A cover with different lyrics, was a charted hit for Lloyd Price in 1959; Dick Clark felt that the original tale of murder was too morbid for his American Bandstand audience, and insisted that they be changed to eliminate the murder. In this version, the subject was changed from gambling to fighting over a woman, and instead of a murder, the two yelled at each other, and made up the next day. However, it was the original, unbowdlerized, version of Lloyd's performance that, on Valentine’s Day in 1958,  reached #1 on the Billboard Hot 100—and stayed there for four weeks!-- and was ranked #456 on Rolling Stone's 500 Greatest Songs of All Time list…

There are over 400 legitimate covers of this tune...
Check it out on Google!