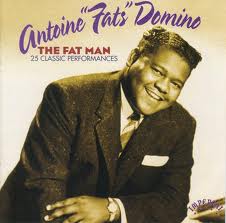 Although born and raised in New Orleans, Fats Domino’s first release had been his tribute to The Motorcity in 1949!!!

Over the next six years Fats would hit the R&B Chart thirteen times and the Hot 100 twice... 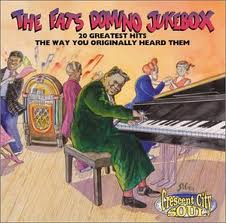 And the flip side,  ROCKIN” AND REELIN’

But it was his 1955 release of “Ain’t That A Shame” that finally gave Fats national attention:

Previously popularized by Gene Autry and Glenn Miller, Domino's version finally crossed into the pop mainstream in July of 1955. 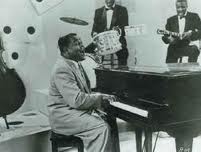 Of course Pat Boone characteristically hit #1 with a milder cover of the song that received wider radio airplay in a racially-segregated era.
“Ain’t That A Shame”--HITTING #10 ON THE Hot 100 and Number One on the R&B Charts--was the first in a string of 37 crossover hits for Domino during the next eight years…
Blueberry Hill, 1956

Check out Fats doing the tune on "The Legends" DVD...


NOTE:
The piano playing on the Beatles hit “Lady Madonna” was inspired by Fats Domino.  According to Paul McCartney,
"'Lady Madonna' was me sitting down at the piano trying to write a bluesy boogie-woogie thing ... It reminded me of Fats Domino for some reason, so I started singing a Fats Domino impression. It took my voice to a very odd place."
-- (The Beatles Bible. 2008)
Domino himself covered the song later in 1968 and it became a US Hot 100 hit (peaking at exactly #100)… 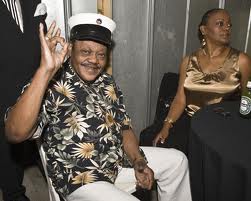 THE USE OF ANY COPYRIGHTED MATERIAL IS USED UNDER THE GUIDELINES OF "FAIR USE" IN TITLE 17 & 107 OF THE UNITED STATES CODE. SUCH MATERIAL REMAINS THE COPYRIGHT OF THE ORIGINAL HOLDER AND IS USED HERE FOR THE PURPOSES OF EDUCATION, COMPARISON, AND CRITICISM ONLY. NO INFRINGEMENT OF COPYRIGHT IS INTENDED
Posted by Tropical Jon at 10:38 AM

Email ThisBlogThis!Share to TwitterShare to FacebookShare to Pinterest
Labels: Evolution of Rock and Roll, Fats Domino, New Orleans, R and B, race music, The Beatles