On April 6, 1950 T-Bone Walker recorded The Hustle Is On AND Evil Hearted Woman… 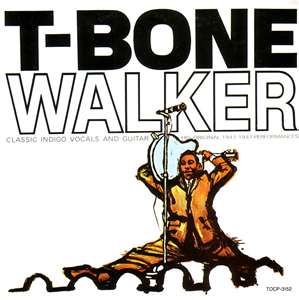 (May 28, 1910 – March 16, 1975)
T-Bone Walker was one of the most influential pioneers and innovators of the jump blues and electric blues sound and the first musician recorded playing blues with the electric guitar…

In 1929, Walker made his recording debut with a single for Columbia Records, "Wichita Falls Blues"/"Trinity River Blues," billed as Oak Cliff T-Bone. Oak Cliff, a section od Dallas, TX,  was the community he lived in at the time and T-Bone a corruption of his middle name (Thibeaux).

Arguably the first musician to employ an electric guitar, T-Bone Walker is without doubt the one who laid the foundation for what is known as modern urban blues AND, in addition to that, he was the FIRST guy to play behind his back and with his teeth!!! 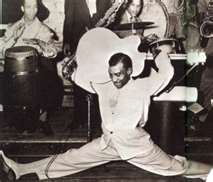 By 1974, persistent stomach woes and a 1974 stroke slowed Walker's career down to a crawl. He died of bronchial pneumonia following another stroke in March 1975, at the age of 64. 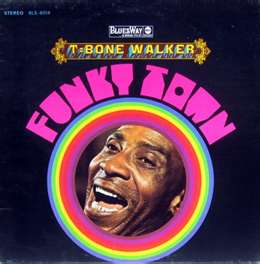 Walker was interred in the Inglewood Park Cemetery in Inglewood, California
In 2003, Rolling Stone ranked him at #47 on their list of "The 100 Greatest Guitarists of All Time"
R.I.P. T-BONE WALKER

THANKS FOR GETTIN’ THIS THING STARTED…

THE USE OF ANY COPYRIGHTED MATERIAL IS USED UNDER THE GUIDELINES OF "FAIR USE" IN TITLE 17 & 107 OF THE UNITED STATES CODE. SUCH MATERIAL REMAINS THE COPYRIGHT OF THE ORIGINAL HOLDER AND IS USED HERE FOR THE PURPOSES OF EDUCATION, COMPARISON, AND CRITICISM ONLY. NO INFRINGEMENT OF COPYRIGHT IS INTENDED
Posted by Tropical Jon at 12:46 AM