Tenor saxophonist Cecil "Big Jay" McNeely has been "the king of the honkers" for over 50 years, and he's still going strong…

Born in Watts, California, on April 29, 1927, he formed his own band with jazz legends Sonny Criss (alto sax) and Hampton Hawes (piano) while still in high school…

But in late 1948, when he was asked to record for Savoy Records, he abandoned jazz for something more raucous and struck paydirt when his second release, a honked-up instrumental called "Deacon's Hop"
went to #1 on the national R'nB charts
in February 1949… 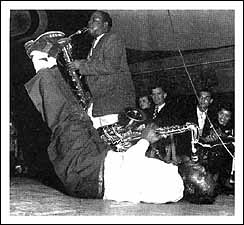 According to The New Rolling Stone Encyclopedia of Rock and Roll, "Big Jay was famed for his playing-on-his-back acrobatics and his raw, hard-swinging playing”

During his act he'd leave the stage, walk across the top of the bar, and sometimes walk out the door of the club, often with a line of people following him… 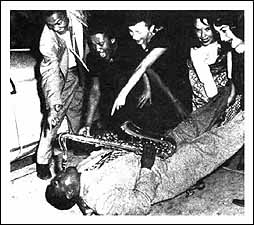 Once, in San Diego, during one such "walk," he was arrested on the street for disturbing the peace; inside the club, his band kept playing until someone could rush down to the police station, post Big Jay's bail, and bring him back to finish his song…

In the early- to mid-fifties, Big Jay added vocal groups to his act, beginning with Four Dots and Dash, which included, at one time or another, 16-year-old Jesse Belvin, Marvin Phillips (later of Marvin and Johnny fame), Tony Allen and Mel Williams. In fact, Belvin made his first recordings with Big Jay, including


This is the only book ever written 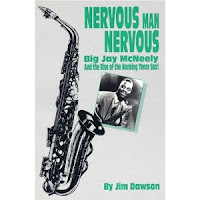 about the R'nB sax and its influences…


THE USE OF ANY COPYRIGHTED MATERIAL IS USED UNDER THE GUIDELINES OF "FAIR USE" IN TITLE 17 & 107 OF THE UNITED STATES CODE. SUCH MATERIAL REMAINS THE COPYRIGHT OF THE ORIGINAL HOLDER AND IS USED HERE FOR THE PURPOSES OF EDUCATION, COMPARISON, AND CRITICISM ONLY. NO INFRINGEMENT OF COPYRIGHT IS INTENDED
Posted by Tropical Jon at 12:22 AM