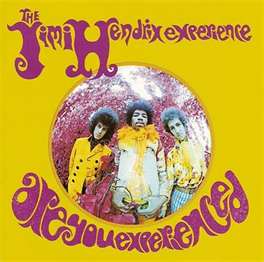 Starting in early 1963, Hendrix performed with Bob Fisher and the Bonnevilles and in backing bands for various soul, R&B, and blues musicians, 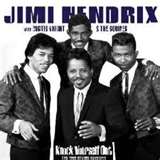 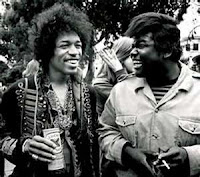 including Chuck Jackson, Slim Harpo, Tommy Tucker, Sam Cooke, and Jackie Wilson. The Chitlin' Circuit was where Hendrix refined his style.
in January 1964 Jimi moved to New York City. In February 1964, he won first prize in the Apollo Theater amateur contest. Hoping to land a gig, Hendrix made the club circuit and sat in with various bands. Eventually, Hendrix was offered the guitarist position with The Isley Brothers' back-up band and he readily accepted.

Hendrix' first studio recording occurred in March 1964, when the Isley Brothers, with Hendrix as a member of the band, recorded the two-part single "Testify". 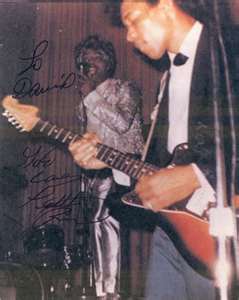 On March 1, 1964, Hendrix (then calling himself Maurice James) began recording and performing with Little Richard.  Hendrix would later (in 1966) say, "I want to do with my guitar what Little Richard does with his voice."

During a stop in Los Angeles while touring with Little Richard in 1965.  He also played on the session for Little Richard's final single for Vee-Jay, "I Don't Know What You've Got, But It's Got Me (Jimi played the opening lick, Don Covay sang the backup, and Billy Preston played the organ.)

Later in 1965, Hendrix joined a New York–based R&B band, Curtis Knight and the Squires, after meeting Knight in the lobby of the Hotel America, off Times Square, where both men were living at the time. He performed on and off with them for eight months  In October 1965, Hendrix recorded a single with Curtis Knight, "How Would You Feel" backed with "Welcome Home" (1966 RSVP 1120) 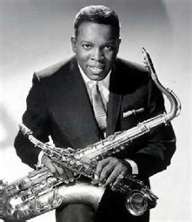 In between performing with Curtis Knight in 1966, Hendrix toured and recorded with King Curtis.

After The Hendrix Experience (formed in England in 1966) was enthusiastically received at France's No. 1 venue, the Olympia theatre in, an on-stage jam with Cream, a showcase gig at the newly opened, pop-celebrity oriented nightclub Bag O'Nails and the all important appearances on the top UK TV pop shows "Ready Steady Go!"

and the BBC's "Top of the Pops"

Word of Hendrix spread throughout the London music community.  His showmanship and virtuosity made instant fans of reigning guitar heroes Eric Clapton and Jeff Beck, as well as Brian Jones and members of The Beatles and The Who, whose managers signed Hendrix to their new record label, Track Records.


The Jimi Hendrix Experience had become very popular in Europe  but had yet to crack America. Their first single there, "Hey Joe" c/w "51st Anniversary" (Reprise 0572, released 1 May 1967), failed to reach the Billboard chart.

The first Jimi Hendrix Experience album, Are You Experienced, was released in the United Kingdom on May 12, 1967 and shortly thereafter internationally, outside of USA and Canada. Only The Beatles' Sgt. Pepper's Lonely Hearts Club Band  prevented Are You Experienced from reaching No. 1 on the UK charts.

Though word of the Hendrix phenomenon spread to the US, he was not seen in America (and no records were released) until the summer of 1967, when, at Paul McCartney's insistence, The Jimi Hendrix Experience appeared at the Monterey Pop Festival, held in Monterey California on June 18, 1967. It was only after this show-stealing performance that his American and Canadian label, Reprise Records, prepared the album for release...

In August, the US version of Are You Experienced saw issue in both the original mono mix and the new stereo mix and became a strong and enduring seller. When the album was finally released in August 1967, three months after its European release, the new lineup-proved hugely influential with the album peaking at #5 and remaining on Billboard’s album chart for two years.

Are You Experienced  has been cited as one of the greatest debut albums of the rock era:


In 2003, the US version of the album was ranked number 15 on Rolling Stone’s list of the 500 greatest albums of all time


. Creem magazine named the album number six on the Top Ten Metal Albums Of The 60s


New Musical Express (UK) 10/2/93 ranked it #29 in its list of the "Greatest Albums Of All Time".
In March 2000 a poll from Guitar World Magazine named Are You Experienced the greatest album of the Millennium.