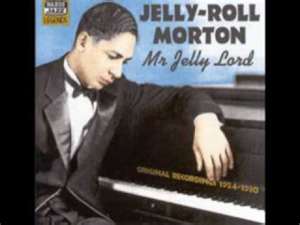 His composition "Jelly Roll Blues" was the first published jazz composition, in 1915.


Reputed for his arrogance and self-promotion as often as recognized in his day for his musical talents, Morton claimed to have invented jazz outright in 1902 — much to the derision of later musicians and critics  However, jazz historian Gunther Schuller writes about Morton's "hyperbolic assertions" that there is "no proof to the contrary" and that Morton's "considerable accomplishments in themselves provide reasonable substantiation...


Morton was one of the best regarded pianists in the Storyville  District of New Orleans early in the 20th century. At the age of fourteen, he began working as a piano player in a brothel. While working there, he was living with his religious church-going great-grandmother and had her convinced that he worked as a night watchman in a barrel factory. In that atmosphere he often sang smutty lyrics and it was at this time that he took the nickname "Jelly Roll", which at the time was black slang for the female genitalia...


Morton's grandmother eventually found out that he was playing jazz in a local brothel, and subsequently kicked him out of her house. "When my grandmother found out that I was playing jazz in one of the sporting houses in the District, she told me that I had disgraced the family and forbade me to live at the house... She told me that devil music would surely bring about my downfall, but I just couldn't put it behind me."


Morton moved to Chicago in 1923 to claim authorship of his recently-published rag "The Wolverines", which had become a hit as "Wolverine Blues" in the Windy City. There he released the first of his commercial recordings, first as piano rolls, then on record, both as a piano soloist and with various jazz bands

In November 1928, Morton married showgirl Mabel Bertrand in Gary, Indiana, and moved to New York City, where he continued to record for Victor. His piano solos and trio recordings are well regarded, but his band recordings suffer in comparison with the Chicago sides where Morton could draw on many great New Orleans musicians for sidemen...


In 1935, Morton moved to Washington, DC, to become the manager/piano player of a bar called, at various times, the "Music Box", "Blue Moon Inn", and "Jungle Inn" in the African American neighborhood of Shaw. (The building that hosted the nightclub still stands, at 1211 U Street NW.) Morton was also the master of ceremonies, bouncer, and bartender of the club. He was only in Washington for a few years; the club owner allowed all her friends free admission and drinks, which prevented Morton from making the business a success. Morton was stabbed by one of the owner's

friends in 1938, suffering wounds to the head and chest. After this incident his wife Mabel demanded that they leave Washington. Is this jazz cat living the Blues Life or what!?!

A nearby whites-only hospital had refused to treat him, and he had to be transported to a lower-quality hospital further away When he was in the hospital the doctors left ice on his wounds for several hours before attending to his eventually fatal injury. His recovery from his wounds was incomplete, and thereafter he was often ill and easily became short of breath.

Morton made a new series of commercial recordings in New York, several recounting tunes from his early years that he had been talking about in his Library of Congress interviews


A worsening asthma affliction sent him to a New York hospital for three months at one point and when visiting Los Angeles with a series of manuscripts of new tunes and arrangements, planning to form a new band and restart his career, the ailment took its toll. Morton died on July 10, 1941 after an eleven-day stay in Los Angeles County General Hospital.