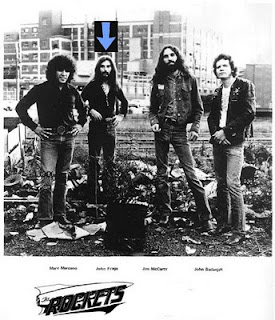 September 27, 2010: Brother John Fraga, bassist with Nolan Strong and the Diablos (on Mind over Matter) passed away

It’s been a year since one of the coolest, most righteous bass players in DETROIT ROCK ‘N ROLL passed away, and we still think about him all the time.


I met John when he was one-fourth of the four piece power house band called THE ROCKETS (John “Bee” Badanjek, Jim McCarty, Marc Marcano and JOHNNY FRAGA). They played regularly at The (Infamous) ODYSSEY, the bar I managed in Ann Arbor, Michigan.


Not gonna write a bunch on this, because my friend RetroKimmer did a decent story when John passed last year—Check out the link below.


John wasn’t just a ROCKET (AS IF THAT WASN’T PLENTY!)—He  also worked with The Bee on a few projects:


And, John wasn’t JUST another cat out of THE Motor City, he had roots all over the place… Check out what John was doing in (of all places!) Iowa…
http://www.midwestmusicmasters.com/bands3.aspx?name=Enoch%20Smoky


WE MISS YA JOHNNY FRAGA—ROCK IN PEACE, BROTHER!!!
Posted by Tropical Jon at 11:15 PM