MOTOWN 25, Part Two: The early songwriters, a bit about all that awesome choreography, a segment with Marvin Gaye and a whole lotta MOTOWN MUSIC…

Part 2 of MOTOWN 25 includes a segment involving the “Early Songwriters”
—This includes Eddie & Brian Holland, Lamont Dozier, Norman Whitfield, Mickey Stevenson, Harvey Fuqua, Ron Miller talking about the lyrics
—And they even get together to do a rousing rendition of Barret Strong’s “Money”


Part 2 also touches on the choreography as part of “the formula” of success with Motown. Early clips, showing the “steps” by, The Marvelettes, The Miracles, The Vandellas, The Supremes, The Pips, The Jackson 5, The Commodores, and, of course The Temptations and Four Tops (the 1983 line-up of the latter two come out live and have an old fashioned “battle”)

NOTE: The only original or "Classic Five" Temptations performing were Melvin Franklin and Otis Williams
Marvin Gaye was on the show:

Already away from Motown and enjoying his current hit “Sexual Healing” on Columbia Records had agreed at the last minute to join the roster of other Motown legends to perform. When he came on, he played the piano and gave the audience a narrative of black music history before he stepped off the piano and killed with his classic 1971 hit, "What's Going On"--To Thunderous Applause!

Marvin's performance on the show was one of his final national television appearances before his murder a year later in 1984…
Motown 25:
Yesterday, Today, Forever (part 2)
—Check it out! 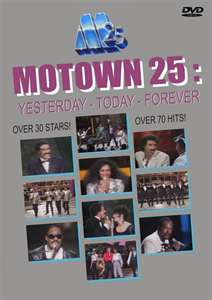 Parts 3 ~ 6 will be on a later post...
THE USE OF ANY COPYRIGHTED MATERIAL IS USED UNDER THE GUIDELINES OF "FAIR USE" IN TITLE 17 & 107 OF THE UNITED STATES CODE. SUCH MATERIAL REMAINS THE COPYRIGHT OF THE ORIGINAL HOLDER AND IS USED HERE FOR THE PURPOSES OF EDUCATION, COMPARISON, AND CRITICISM ONLY. NO INFRINGEMENT OF COPYRIGHT IS INTENDED
Posted by Tropical Jon at 1:19 PM