"I Fall To Pieces"

Cline's Greatest Hits L.P. has sold over eight million copies, making it the largest selling female Country album of all time, until Shania Twain came along.
Patsy Cline was killed

when her private plane crashed near Camden, Tennessee.
R.I.P. Patsy Cline ~
Thanks for some very cool country music... 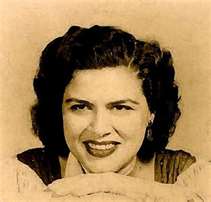 THE USE OF ANY COPYRIGHTED MATERIAL IS USED UNDER THE GUIDELINES OF "FAIR USE" IN TITLE 17 & 107 OF THE UNITED STATES CODE. SUCH MATERIAL REMAINS THE COPYRIGHT OF THE ORIGINAL HOLDER AND IS USED HERE FOR THE PURPOSES OF EDUCATION, COMPARISON, AND CRITICISM ONLY. NO INFRINGEMENT OF COPYRIGHT IS INTENDED
Posted by Tropical Jon at 10:46 AM

Love these -thanks Jon!