Jimmie Vaughan is far more than just one of the greatest and most respected guitarists in the world of popular music. “He is a virtual deity–a living legend.” After all, Vaughan provides a vital link between contemporary music and its proud heritage, as well as being a longtime avatar of retro cool

Vaughan’s musical abilities and sense of style were obvious from an early age. Growing up in Oak Cliff, just south of downtown Dallas, TX., he was weaned on classic Top 40 radio (which was invented in his hometown), vintage blues, early rock ‘n roll and the deepest rhythm and blues and coolest jazz of the day, thanks to the sounds he heard on Dallas’ AM radio powerhouse KNOX and border radio stations like XERB, where personalities like the legendary Wolfman Jack sparked a youth revolution.
“I never got over that stuff, and I never will. That’s the kind of music I like”
--Jimmie Vaughan

Jimmie Vaughan started his first band, The Swinging Pendulums when he was 15 years old. The Swinging Pendulems were soon playing the rough and tumble Dallas nightclub scene just about nightly. Jimmie joined The Chessman at age 16, eventually opening concerts in Dallas for Jimi Hendrix, after becoming the area’s top musical attraction. It wasn’t long after that when he heard Muddy Waters and Freddie King play in Dallas--That’s when Jimmie began to delve deep into the blues, and began relying on the power of his “less is more” approach… 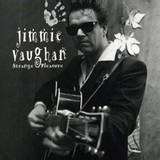 In 1969, Vaughan helped found Texas Storm, a group that eschewed Top 40 covers for blues and soul with a Texas accent. The band eventually migrated to Austin, where they won over the college crowd and the Black and Chicano communities on the Capital City’s East Side. Vaughan also helped jump start his brother Stevie’s career when the younger Vaughan joined Texas Storm on bass…

Vaughan founded The Fabulous Thunderbirds with Kim Wilson in the mid 1970s. When Antone’s nightclub opened in Austin in August of 1975, the Thunderbirds became the house band, sharing the stage and jamming with such blues greats as Waters, Buddy Guy, B.B. King, Albert King and a host of others, all of whom recognized Vaughan as the man who would keep the music they developed alive for future generations.


As Jimmie recalls, “One time when we were playing Antone’s, opening for Muddy, I thought, okay, I’m going to do this Muddy Waters-style slide thing and see if I can get a reaction from him. And the next night I did it again. And he came out behind me and grabbed me around the neck, and said he liked it. And he told me, ‘When I’m gone, I want you to do that, and show everybody that’s what I did. I want you to do it for me.’”

The Fabulous Thunderbirds brought the blues back into the pop charts and the contemporary musical lexicon, sparking a blues revival that continues unabated today.
Keith Ferguson: Bass


Hey, Y'all, GET THE PICTURE…Go to You Tube and get all the Jimmie you could wish for (recorded, that is: I saw him live on the street in Cowtown—Fort Worth—last summer and he KILLED!)


Prior to leaving the group in 1990, Jimmie had joined up with his brother Stevie to record Family Style… 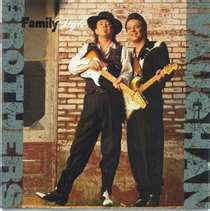 As Jimmie Vaughan again emerged, as an artist in his own right, his reputation as a master musician became even more apparent, thanks to the admiration of blues legends like B.B. King and Buddy Guy, such guitar superstars as Eric Clapton and Z.Z. Top’s Billy Gibbons, and rising talents like Jonny Lang and Kenny Wayne Shepherd. As Clapton notes, “The first time I heard Jimmie Vaughan, I was impressed with the raw power of his sound. His style is unique, and if I’ve learned anything from him, it’s to keep it simple.” Likewise, Buddy Guy once proclaimed: “He’s unbeatable when it comes to the blues. He just plays it like it’s supposed to be played.”

Even Stevie Ray Vaughan acknowledged that when people would compare his playing to that of his brother, there was really no contest. “I play probably 80 percent of what I can play. Jimmie plays one percent of what he knows. He can play anything”
Jimmie Vaughan is more modest in assessing his abilities, though very clear when it comes to his approach. “I try to speak with my guitar in sentences,” he explains. “The people that I enjoy and the music that I enjoy are not about just a bunch of licks strung together. If you just play a bunch of guitar licks that aren’t connected, it’s like throwing a lot of words into a bowl. It doesn’t make any sense. It’s just words. “When I listen to Gene Ammons, the great saxophone player, I get the feeling he’s telling you a story. That’s how I’d like to play guitar someday, when I grow up. That’s the goal. That’s what I enjoy. That’s what makes me get chill bumps–when you listen to music where the phrasing comes out and it speaks. That’s the conclusion I’ve come to after 37 years of playing…


“I’m just trying to have fun like everyone else,” he concludes. “I’ve been playing since I was 13. I play every day. I’ve never stopped. I can’t imagine that I could exist without it.”


As a final note, and to connect Jimmie to the Motorcity even more so than with his music
—Jimmie’s into cars TO THE MAX!!!


“I DON’T PLAY GOLF, So cars are my hobby,” he says with a chuckle. “I was into cars as soon as I was old enough to walk. I built lots of models when I was a teenager. It’s not like transportation. It’s art you can drive to the store.” His first custom restored hot rod is a 1951 Chevy Fleetline that’s become a well-known sight on the streets of Austin, TX over the years. He then augmented his collection with a 1963 Buick Riviera, 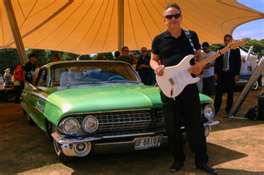 
THE USE OF ANY COPYRIGHTED MATERIAL IS USED UNDER THE GUIDELINES OF "FAIR USE" IN TITLE 17 & 107 OF THE UNITED STATES CODE. SUCH MATERIAL REMAINS THE COPYRIGHT OF THE ORIGINAL HOLDER AND IS USED HERE FOR THE PURPOSES OF EDUCATION, COMPARISON, AND CRITICISM ONLY. NO INFRINGEMENT OF COPYRIGHT IS INTENDED
Posted by Tropical Jon at 11:16 PM