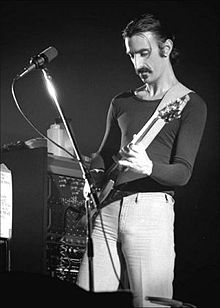 Frank Vincent Zappa (December 21, 1940 – December 4, 1993) was an American composer, singer-songwriter, electric guitarist, record producer and film director. In a career spanning more than 30 years, Zappa wrote rock, jazz, orchestral and musique concrète works. He also directed feature-length films and music videos, and designed album covers. Zappa produced almost all of the more than 60 albums he released with the band The Mothers of Invention and as a solo artist.  (Wikipedia)


As a kid, I was DJ’ing, mostly R&B, Blues, and Soul, as well as what was known as “The Pittsburgh Sound” when I moved from Pennsylvania to Detroit. That was 1966. One night I decided to quit racing up and down Woodward and caught a Frank Zappa and the Mothers of Invention  show at the Motor City Roller Rink. The cat (Zappa) was up front putting down an incredibe show—and doing it through a megaphone! But, it was the music that knocked my Argyles off—I’ve been a dedicated Zappa fan ever since, and I miss the cat to the max…
Dig a few (a very few!) of my favorite Zappa tunes:


Frank Zappa was an incredible, talented, eclectic man. These few tunes are just a few of my favorites. Go to YouTube and search out the VAST body of work by Mr. Zappa--He produced and/or wrote and/or played on no less that 91 album releases in his short lifetime. R.I.P. Brother Frank Zappa--You da Man!!!
Posted by Tropical Jon at 10:49 PM