The Miracles, Vibrations, Blue Notes and Joe Tex at the Uptown--Another landmark concert in the EVOLUTION OF ROCK ‘N ROLL… 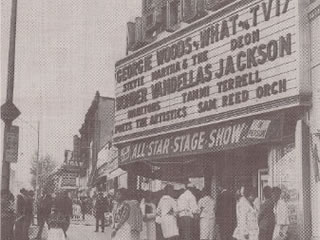 The Uptown Theater on Broad Street, Philadelphia, was a major venue on the "chitlin circuit" from 1951 to 1978. .


On Dec 02 1961 Jocko Henderson brought in groups out of Detroit, New Orleans, LA,  and, of course, Philly


The Miracles, a young group on a young label, represented Motown with their hit tune “Shop Around”


L.A. was represented by The Vibrations, a group which initially began recording as The Jay Hawks, and had a hit in 1956 with "Stranded in the Jungle" (which hit #18 on the US Charts and became a huge hit by The Cadets the same year).


concurrently, they had a hit under the name The Marathons with "Peanut Butter" which hit #20...

The Blue Notes   While most people attribute the name Blue Notes to the 1970's group of Harold Melvin and Teddy Pendergrass, it was Roosevelt Brodie, Franklin Peaker, Bernard Williams, Jesse Gillis, and Sam Salley (or Sally) that first formed the group back in the mid 1950's and made some of its most memorable recordings.

Another landmark concert  in the EVOLUTION OF ROCK ‘N ROLL…

The vibrations were a n outstanding group.i saw them perform many times at the apollo theater,and you always got your moneys worth.why this great group still always gets over looked is truly a sad thing?a group that gave so much gets so little in return.this group recored many hits that others copied and got the credit for.for instance hang on sloopy,watusi,peanut butter and the list goes on.i truly hope that some day the vibrations will recieve some recoqnition for their talents,abilities,just like all the other groups of the sixties. sincerely yours michael mcgehee